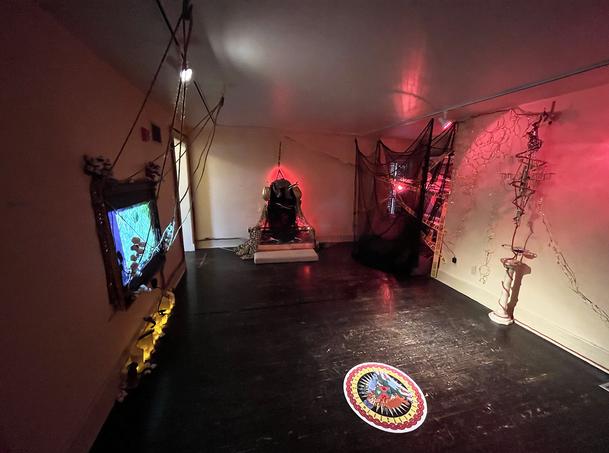 Blood is Thicker than the Water that Separated. U.S.

Tentacles Across the Sea

Dario Mohr is a first-generation Grenadian, U.S. citizen, and self-described grandma's boy. He visited his grandmother and family in Grenada throughout his childhood until she passed away in 2013. This event kept him away from Grenada for several years, and then in 2019, he lost his most cherished possession: a gold and diamond ring embossed with his first initial that she had given him in childhood. Living with the fast-paced lifestyle that NYC requires, he had not grappled with the magnitude of the loss until the 2020 pandemic, when many of us were forced to reflect in the confines of our homes. Inspired by his grandma’s legacy, Mohr presented the solo show "Don't Let It Slip Through Your Fingers" at Flux Factory in Spring 2021. This moment catalyzed a wealth of questions leading to a research trip back to Grenada to reconnect with the rest of his family and the culture of his recent ancestral heritage. Now, one year following this show, Mohr is presenting "Blood is Thicker than the Water That Separated U.S." at the Lewis Latimer House Museum. Mohr hopes that his experience can connect with audience members who are also faced with the loss of ancestral connection. Many marginalized people in the U.S. have been disconnected from their heritage in different ways. Indigenous people experienced a genocide on this land that can never be compensated. Immigrants like Mohr’s mother arrive and are immediately met with the culture shock of forced assimilation in order to be successful. People of African Descent, whether born in the U.S. or the Caribbean, share a sense of recent cultural identity that includes vestiges alluding to their Indigenous African ancestry. Drum rhythms, dances, stories like Anansi the Spider, the appreciation for color and luster in fashion, food seasoning and so much more have influenced, and in some cases pioneered, much of U.S. cultural history. The enduring legacy of West Africa shines through influential people like Lewis Latimer, who despite the racial adversity of his time, established himself through his inventions and owned his home. Mohr spent his childhood in Flushing, Queens, attending P.S. 20 but was never taught about Lewis Latimer in school. Sadly, even inventors and Renaissance men like Latimer were not given their proper credit and acclaim due to their background and skin color. Dario views it as an honor to present this series in the home of Latimer, who is in his eyes the Black excellence that so many aspire to be. “Latimer is a historical Black figure who demonstrates how much resilience we have and how proud we should be as survivors, and prosperous people still existing in this country, and all over the Americas today.” Mohr acknowledges that the U.S. is his home, and that Black culture in the U.S. and the Island of Grenada have a rich cultural history. He also realizes that the distance between the U.S. and one's ancestral homeland can seem to grow as time passes, increasingly distancing one from his/her/their ancestral identity. Through an installation-based, dark-room exhibit illuminated by LED light and other visual languages inspired by Lewis Latimer's work as well as his ancestor culture, Mohr's exhibit attempts to bring a piece of what he regained in Grenada, back to the U.S. A reclamation of lost heritage can be a triumph of self and community that adds to the already mighty legacy of Black culture that exists in the U.S. and the Americas today.